Since I need to look up some ASCII codes all the time, I decided to put an ASCII table on my homepage for fast access and easy reading. I know there are a lot of alternatives around the web, but I really like to have often used documents at $HOME... ;). And since I believe this document can be useful to others too, I placed it here. 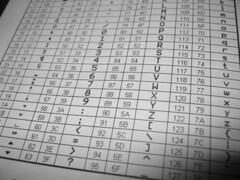 From Wikipedia: "ASCII abbreviated from American Standard Code for Information Interchange, is a character encoding standard for electronic communication. ASCII codes represent text in computers, telecommunications equipment, and other devices. Most modern character-encoding schemes are based on ASCII, although most of those support many additional characters. Despite being an American standard, ASCII doesn't support symbols like the cent, ¢ (or €, ©), unlike some extended ASCII supersets, such as the modern UTF-8, though it does support the dollar, $. Nor does it support words like résumé, Beyoncé or jalapeño, or the Old or Middle English alphabets, e.g. missing æ and ð, meaning e.g. Encyclopædia Britannica can't be written using its old spelling. Very few languages or alphabets have full support, though Rotokas does, and the modern English alphabet does (it's just that that alphabet doesn't support all English/American words)."

From Wikipedia: "Extended ASCII means an eight-bit character encoding that includes (most of) the seven-bit ASCII characters, plus additional characters. Using the term "extended ASCII" is sometimes criticized, because it can be mistakenly interpreted to mean that the ASCII standard has been updated to include more characters, or that the term unambiguously identifies a single encoding, neither of which is the case."