The tech behind this site

I was asked some days ago how I am creating this website because it is very fast, seems not to be using WordPress and looks very custom. I will explain what is going on here.

I am running a very hard modified version of a very old version of WordPress locally on my Notebook. I patched a lot of stuff for creating static HTML files from this installation. I afterwards are running a Shell script mostly using the mirror function of GNU wget (wget -m) for mirroring the local site http://hanez/ to a local directory and then sync it via rsync to my server. The local directory is a Git repository so I could always switch back to old versions of hanez.org.

So, this is WordPress but very hardly patched... What did I patched? I don't know all the modifications actually but most of it was patching all parts of the code to don't use the domainname in the URL's like href's or img sources spread around in the code. Locally my hostname is "hanez" in the web my hostname is "hanez.org" so that makes problems. I think it was mostly the RSS stuff where I needed to fix that. But that was very easy because the static content was created by following all links on the site. I am just using hanez.org as static string in all links in the RSS feed.

I also changed all path information so there is no "wp-admin", "wp-content" etc. URL part to some content anymore.

The photo gallery is completely written by myself. Many files are not created using WordPress, they are just plain HTML files. WordPress is including a head and a foot file provided by me and mostly don't uses the template directory. I think I modified and added some functions but I don't know them exactly anymore. It was mostly customizing the HTML output to be compatible to my CSS file and logical structure. I know there are some bugs but for me that is not important. I think it works very well and I am optimizing all the time. Maybe I will install a current version of WordPress in the future and create a patchset but I have no time for that now.

You think that sounds a little bit crazy because I am recreating all pages on every change on the site...? Yes, it is crazy but it takes nearly no time. This site is being generated and published in about 60 seconds (hasync0.81s user 0.45s system 2% cpu 56.384 total) without the photo gallery but this is a very special part. The photo gallery is using the Flickr API and this is very slow. Since I am uploading photos very rarely this is not a big problem to me and the gallery is only recreated when there are new files on Flickr.

I am syncing some directories to the server like "/images" or "/files" to make sure that files where I am linking to from other websites are still available in the net even if I am removing links to those files so "wget -m" will not mirror them anymore.

The most benefit for me releasing my website like this is, that my webserver is just a stupid copy of what I have running locally. There is no dynamic data creation on my server, there is no scripting language running and I don't need to make backups of /var/www. I also don't have to run a database on this server

Locally it is great to a have a simple interface for publishing information by still being totally free when integrating own stuff like the gallery. Even a mix of PHP and some small parts of Python code are running here... So, I am totally free when coding this site because I never will produce a monster running on a server and wasting CPU time just because everything is created dynamically but without sense...

One thing I shouldn't forget to mention is that I am running sometimes very crappy code in my WordPress installation but I don't need to care. I am the one and only person running this code. I know that's not a good practise but I am running PHP here and this could really make problems on public webservers. So security is in no way important when writing this website's code.... ;)

I switched from MySQL to MariaDB some time ago and now I read in the news that Wikipedia is switching too. I really recommend to give MariaDB a try. Nothing is changing to you if you are running Webapps like PHPMyAdmin, Wordpress etc. You are just switching to a 100% open source software that MySQL is not anymore.

I am using Gentoo and Sabayon Linux and switching was just installing MariaDB, MySQL was automatically removed. Restarting the service "mysql" was the only thing to do afterwards. All databases were up and running whithout any configuration. Make a dump of your databases before so you could import the data when something fails with the raw datafiles. Everything worked out of the box for me and even my backup scripts are working without any changes because of 100% MySQL compatibility.

I like to replace software on my workstation that is not 100% open source. It is great that MariaDB is on its way and we could feel like we felt the good old "MySQL" days... ;)

Dear hosting providers, please switch from MySQL to MariaDB. Everything is compatible and when you are doing the first step, web application developers will follow. MySQL is great but it is not freedem like MariaDB and we all used the freedom of MySQl in the late 90's to build up our hosting stuff... It was a benefit for the MySQL project but mostly for us. So let us now do the same and give MariaDB the chance for replacement. Then the develepment of the most succesfull open database management system can go on again. Thanks for that to all developers of MariaDB!

Let's get the party started

The winter was long, the year began cold... Today I felt a little bit that spring is not far away anymore. \o/

I was at the beach and enjoyed it very much. Energy is back! Let's get the party started! Welcome 2013!

I got a NAS device and installed Linux 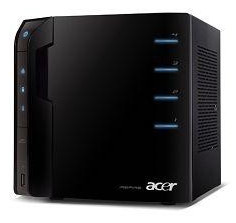 Today a friend gave me his old NAS as a gift... It is an Acer easyStore H340 with 2 x 1TB harddrives. There was a broken Windows installation on it which I directly replaced with the very nice Debian based NAS solution called OpenMediaVault.

I setup the box within some few minutes and it is wonderful. I must say that I installed the OS on an external USB stick because I wanted a mirrored RAID and didn't wanted to insert a 3rd harddrive just for the OS. I will maybe add a small SSD or flash on the SATA bus at some time and will then put the OS there... but only if I am not adding two more harddrives... ;) For now everything is nice like it is.

The web GUI is very clean and easy to use. The RAID was also setup within the web GUI. Everything is just some clicks and you're done... :)

I am happy about this new device!

I was not very active in the past few month on writing here. Now I am back!

The new Year began with a very hard influenza and I was in bed for nearly 3 weeks... In that time I thought a lot about what to do next. After Christmas I ordered a SSD disc for my Thinkpad and I am impressed. The system boots in a few seconds now. I upgraded my RAM from 4GB to 8GB too... ;)

Since I am producing electronic music (techno and trance) again, I needed to install Windows on a seperate Partition because the latency is not acceptable when running it in a virtual machine. Making music with Linux is not possible if you want to do it not just for fun... :(

With this decision I replaced my Gentoo Linux installation with the wonderfull Gentoo based Linux distribution called Sabayon. I have tested it some time ago and I really like it. I have the power of Gentoo and I don't have to compile everything. Thanks to Gentoo and all the developers! After more then 10 years of Gentoo usage I switched... BTW: My Servers are still running Gentoo! ;)

I also added a new page to this site in the main menu. You will there find my selfmade electronic music!